Steps 1 - 4 are complete.  Even after 16 years since the last time I've done any substantial scenery, it's coming back like riding a bike.

I inserted the sleeper ties and glued them in place with white glue being careful not to let it glob up around the ties, next came the paint.  Before painting, I wanted to protect the switch points so scraping wouldn't be needed.  I've read and seen where a strip of tape was placed across the points and frogs and then paint was applied latter by a brush to keep it off the points.  I wanted to try something different.

I took a small piece of napkin, rolled it between my fingers until it was big enough so I could pack it in between the point rail and the stock rail.  This should keep the paint off both surfaces.  This also held the opposite side tightly closed so that no paint could get on their surfaces. 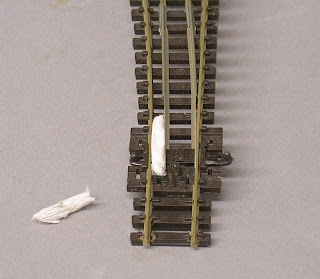 I also took a small drop of oil and placed it in the joints of the switch points where they hinge on the Peco turnouts, my thought was this would keep the paint from insulating the switch points which has worked very well in the past.  Please forgive me, by the time I got the picture snapped the oil had puddled.  You only need a small drop. 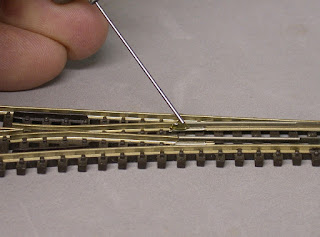 Now I'm ready to paint.  I decided to use Floquil Rail Brown.  In the past I've used Floquil Roof Brown, but since this was more of a branch line and didn't get heavy traffic, I wanted a lighter brown.  Rail Brown has a tinge of green so I added a few drops of  Roof Brown to offset the greenish hue.  After the ballast is in place I plan to take a wash of some lighter brown and/or gray to maybe try and give the ties a sun faded gray look.

Here is Malvern with just the sleeper ties inserted 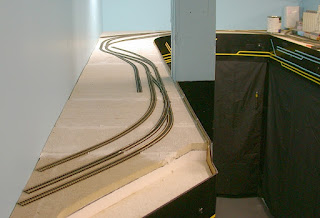 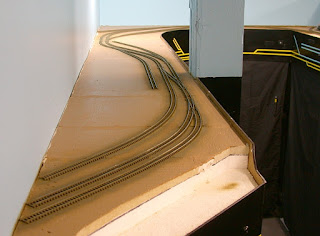 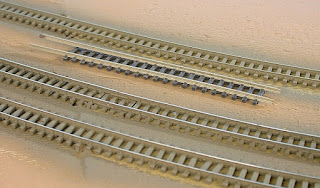 Since I used Atlas C80 and not C55, painting the track with a single color helps to hide the over sized rail.  I'm still deciding whether or not to use a Paint Pen to darken the rails a bit.  My concern is if I darken the rails with a darker brown or weathered black it will make them stand out and appear taller again, thus defeating the purpose.
For now I think I will just forgo painting the rails and just continue to ballast.  I can always come back with a Paint Pen if needed.

Getting tired of seeing nothing but blue skies on the layout, I got the itch to paint my background.  Having never done this before  I wasn't quite sure what it would turnout.  I have read through books, scanned through layouts on the internet and have used Google Earth to get some idea of what the terrain of  Malvern, AR looks like.  Much to my surprise, it's a lot flatter than I recall from a trip I took  through Tennessee, Arkansas and Missouri back in 1991.  I remembered more low rolling green hills than what I have seen on Google Earth.
One layout that I came across that has a backdrop that I was looking for is the Housatonic RR in N Scale.  It's set in Southwestern New England.  It's a simple, yet effective backdrop that gives an illusion of distance using three basic colors with no major details.  To me, it does what a back drop is suppose to do;  It gives the scene depth, but does not draw your eyes to it.  In a few of the pictures where the owner has placed the buildings, you can just catch a glimpse of the rolling hills in the back ground.

So with a pencil in hand I started to sketch out the horizon.  First I drew the close hills and then when back and added a second horizon, above and behind the first.  I used some of the cheaper acrylic paints like Apple Barrel.  I started with a lighter green for the distant hills, then grabbed a darker green for the closer hills.

This is what I ended up with. 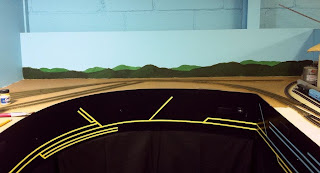 While it's not terrible, it's not quite what I had in mind either.  With this first attempt I did manage to get the feeling of depth and distance with the two colors.  I also was able to blend each color of paint a bit so as to vary the shades of those colors.  This helped to add a little depth within each color.  You can kind of see this on the dark green hill in the middle, the left side is a little lighter that the right side [Something I did pick up from Bob Ross]. I think a little yellow will help this even more.

A few things I need to correct;
First, the hills are a little too tall, they should be shorter to help convey distance better.
Second, I think they are too bumpy, they need to be flatter and smoother according to what I've seen on Google Earth.
Third, the colors are way to green and way to rich.  To my eyes, I have the feeling that these hills are not that far away.  I need to lighten the colors quite a bit and while I'm at it, the one thing I forgot to do is to mix some blue to the greens, this is suppose to add a "Fog" to the background colors and help them fade away in the distance.
Another thing that didn't help was the dark green paint dried darker than I expected.

The next night I pulled out the can of blue paint and covered the "not so distant hills" so that I could start over.  I also went out and picked up a few more lighter colors of the acrylic paint, along with a bottle of  Yellow to vary the shades of the greens and a bottle of Blue to help fade greens.

Bob Ross I'm not, but this has given me a chance to get my feet wet and gave me a feeling and an idea of what I need to do the next time...