After getting the bridge roughed in and the road secured in place I made some guardrails out of small sections of Hardware Cloth and I soldered a section brass rod to the top and painted it all gray.

I planned to add a concrete erosion slab under the bridge but found a bag of WS tallus which I thought might be a little more era appropriate.

I weathered the bridge with Pan Pastels and with some instructional help from David Foxx, I added some grease and grime lines to the lanes of the road and bridge using black chalk. 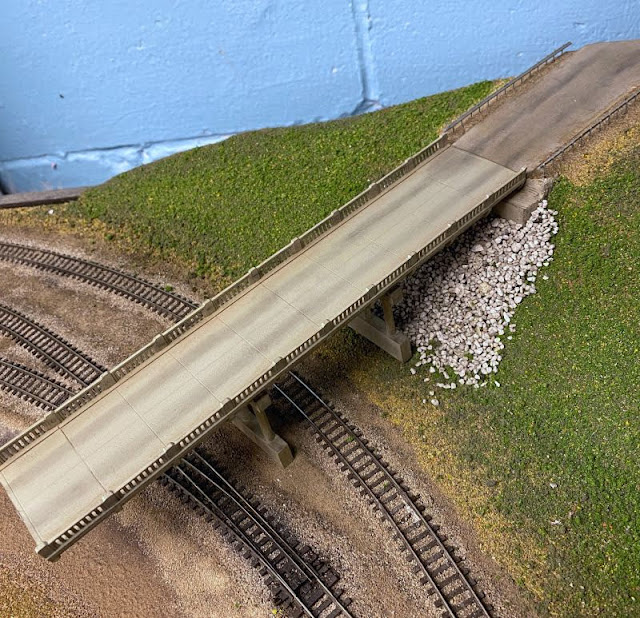 Next I started making some imitation Super Trees.  Since these would be in the background they didn't need to super detailed.  I started with some weed stalks that I had stashed away years ago.  I used WS Polyfiber and stretched it real thin and wrapped it around the stalks.  Sprayed it with cheap "Super Hold" hairspray to glue it to the stalks and to hold several shades of green WS fine ground foam to the polyfiber for color.

For some of the shorter shrubs I just stretched out the polyfiber and added the ground foam without the weed stalks. This is pretty much the same method I used for some SuperTrees I did a while back.  I also added in some WS coarse foliage to help fill in any gaps and for a variation.

I had made and used 15 trees and shrubs when I took this image.  I wound up making a dozen or so by the time I was done.  In another post I'll show how I made the imitation Super Trees. 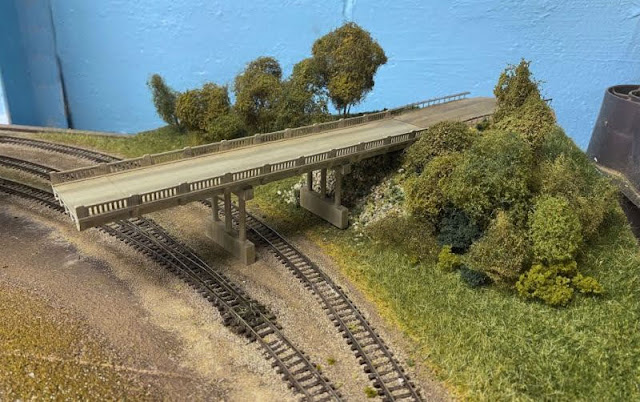 I'm gonna stick a fork in it for now.  The last thing I need to do is to get the "Distant hills" painted on the backdrops as I've done elsewhere on the layout, until then I wanted to get an idea of the final scene so I took about 25 shots and photo stacked them and then edited in a stormy sky.

The NB Winnfield local passes under the Wyatt Rd. overpass with less than a mile to go before it reaches Biddle Yard.  Hopefully the crew will get her tied down for the night before the late afternoon thunderstorm rolls in on them. 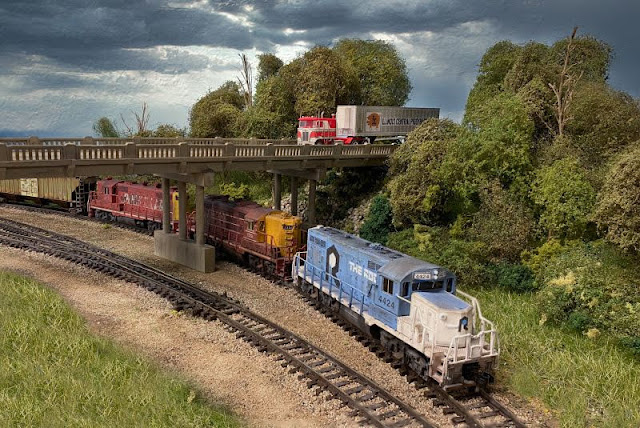 I named the bridge after my friend Wyatt who suggested that this scene was begging for a bridge.  Thanks Wyatt!