Is it time to let the sheep out?

Last night I finally got a good chance to play around with some static grass.

Things went good for the most part.  Answered a few questions that I've had and got a chance to play with a couple of brands of grass other than Woodland Scenics. Also tried a couple of different ways to glue it down.

The first time I tried the static grass was with diluted glue and Woodland Scenics 2mm.  Wasn't too impressed with this for a couple of reasons.
1 - I didn't like the length or the color.  It looked like Peach fuzz or frosted grass.
2 - It didn't stand up too well.

I was told that the diluted glue could have caused the grass not to stand up.  Being so thin, the glue ran up the grass and bogged it down as well as the grass not being very long to start with.

Also the color of the WS wasn't as green as I would have liked it to be.

This time I had ordered two different Noch blended grass packs.  These have a mixture of 2.5mm and 6mm grass and several colors in a mostly green/yellow. Both colors were very close to being the same, there really wasn't much of a difference.  After I got them down, the yellow in the mixes really showed up.

The other grass I got was some Silflor brand in a summer green 4mm  and a lighter green later summer 6mm.  This was much darker green without the yellow. However after applying some of it, I decided to add a small pinch of the Noch to add a bit of yellow.  I can see how you can spend a small fortune on static grass trying to get the right color mix.

Before I go any further, let me explain that I had glued down a layer of ground foam for a base color. For this I used WS Blended Turf, the green stuff.  Then I applied glue over this and applied the static grass.

With the woodland scenics I used a thin glue mixture that didn't work well.
Then I was told to use Hair Spray and spray it on the ground foam and let it tack up a bit before applying the static grass. This worked OK, but I had to make a mask out of paper to cover up any place I didn't want the grass to stick to.  Kind of a PIA, but it worked.

Last night after revisiting a few videos on applying grass, I seen one where the modeler used straight Modge Podge right out of the bottle without thinning it. Not having any flat Modge Podge I tried using some Matte Medium right out of the bottle and then later some White glue that I did thin down about 1 part glue to 1/2 part of water.  Just a enough to make it spread easier but not enough to run up the grass and bog it down.

Both glues work well and I think this will be the way I will continue in close quarters.  The Hair Spray will work in wide open areas that won't need much masking.

The other thing I found out was the actual applicator.  Mine is powered with a 9v battery which seems to work, but I think I was using and old battery and it wasn't allowing the grass to stand up.  This could have been part of the problem in my earlier attempt?
I also noticed that the battery life isn't that long or all the batteries were already weak or drained?   Once a new battery was installed, the grass stood right up!  If the batteries drain that fast, I can see a plus for a 110v version!

OK enough of me rambling, let's get to the pictures...

These first two shots are of the W&OV engine facility [yeah I know I need to repaint the asphalt]. 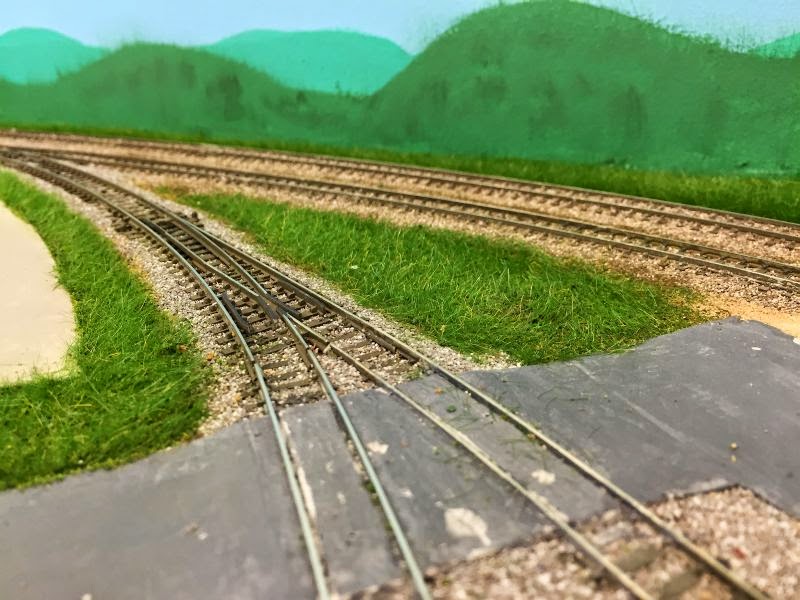 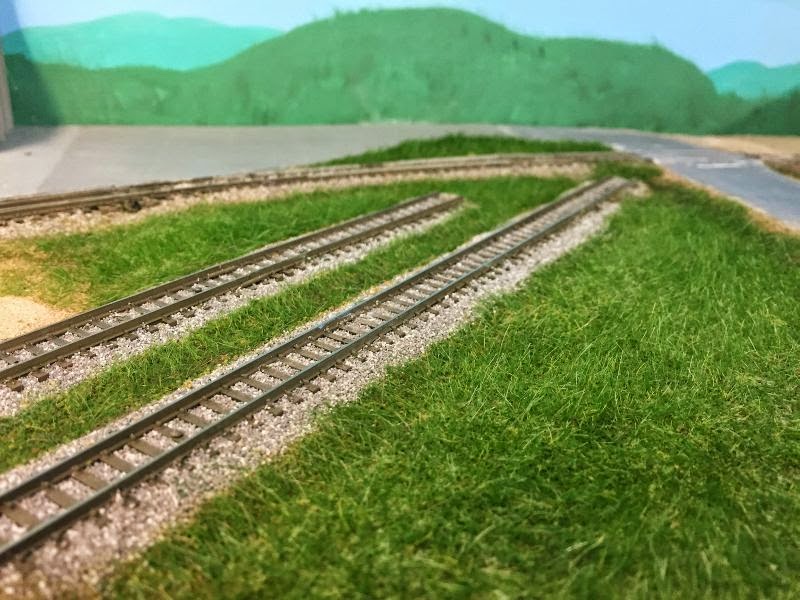 The next three shots are of the Olin-Chlor sidings. These turned out pretty good! 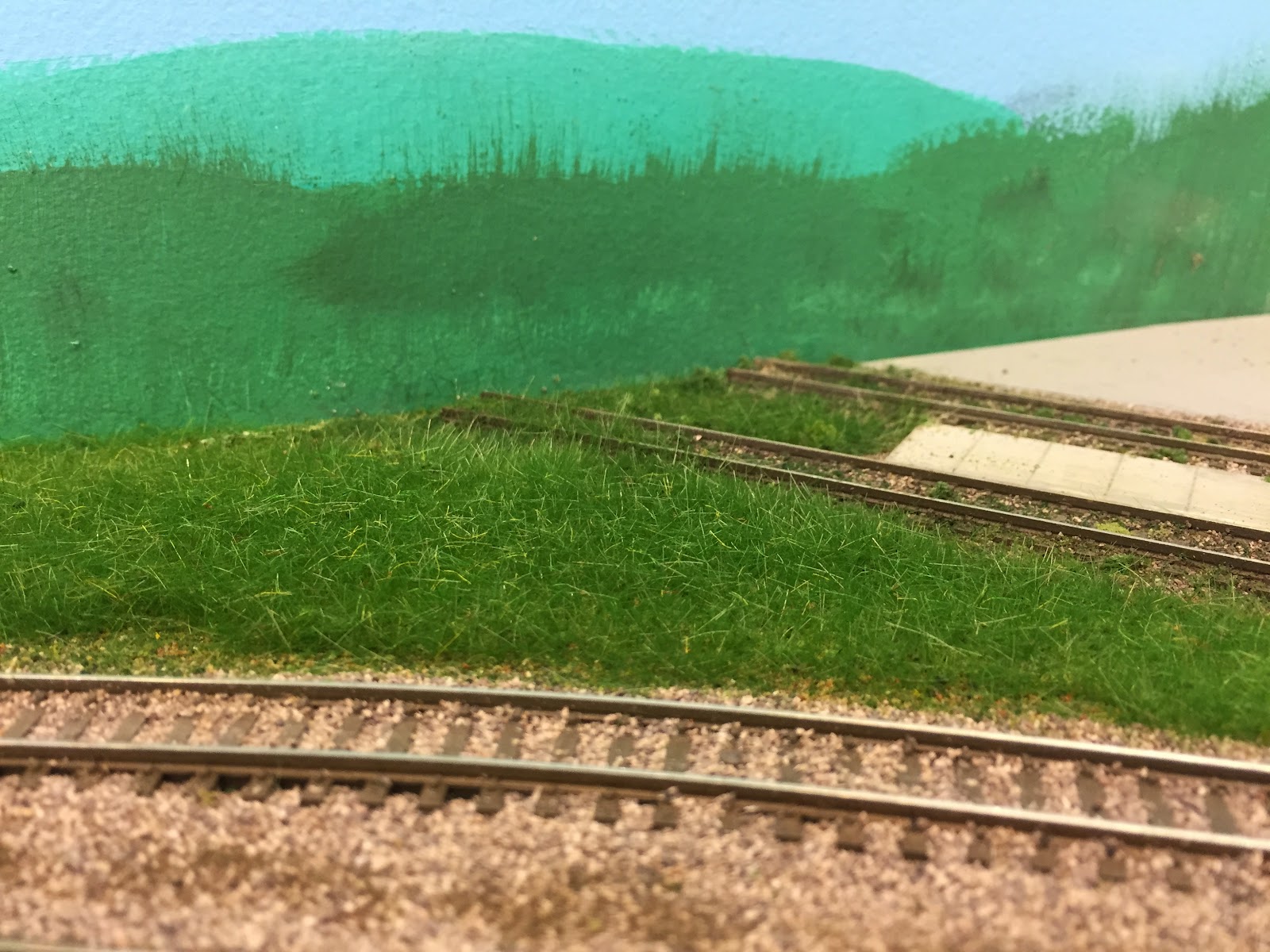 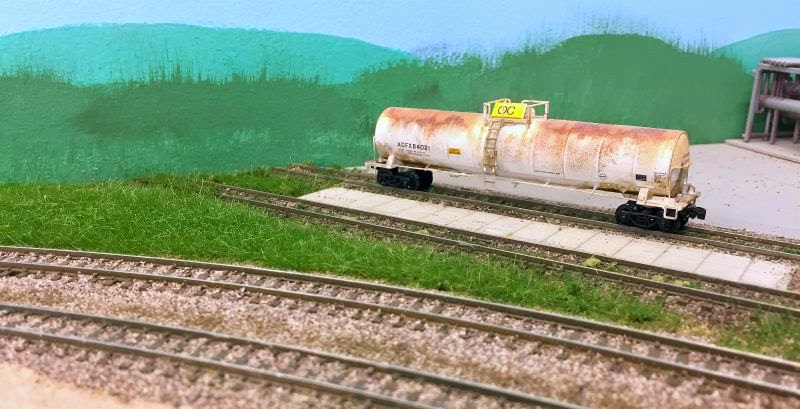 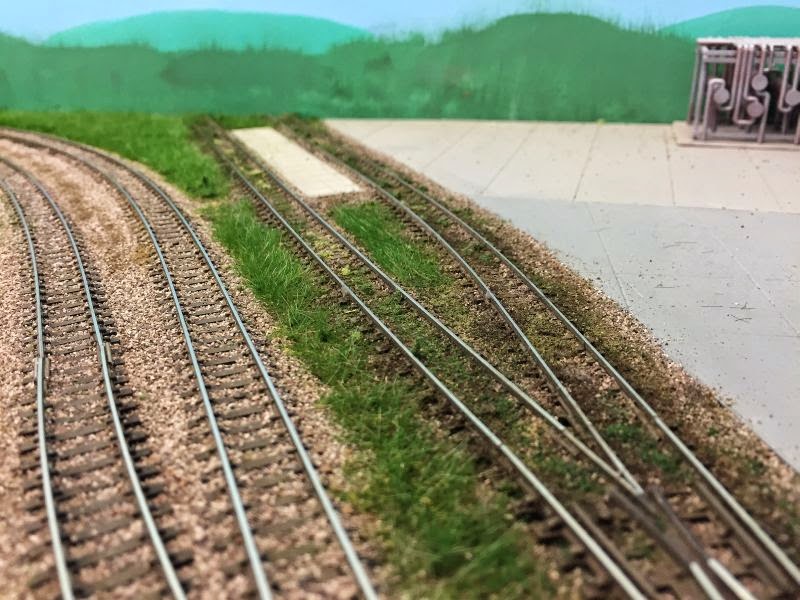 The next five are the Crushmoore Chip loading siding. I still need to clean this siding up. 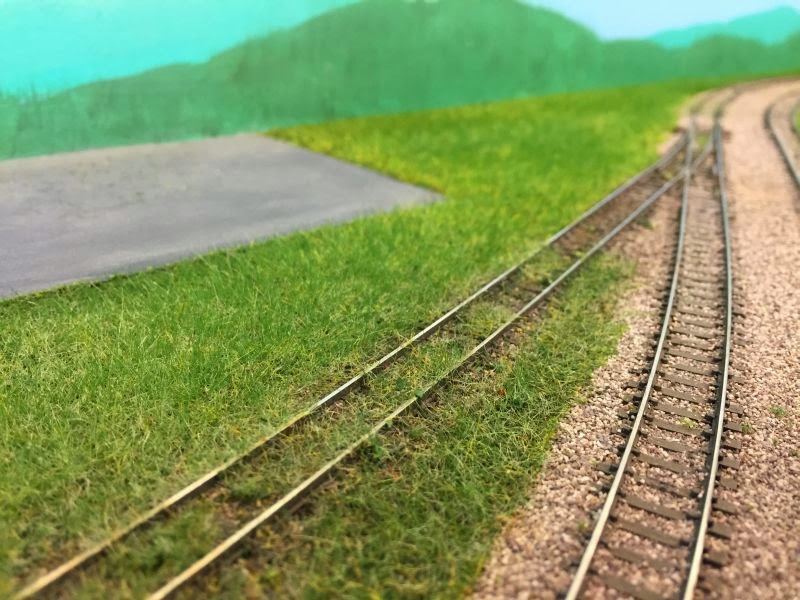 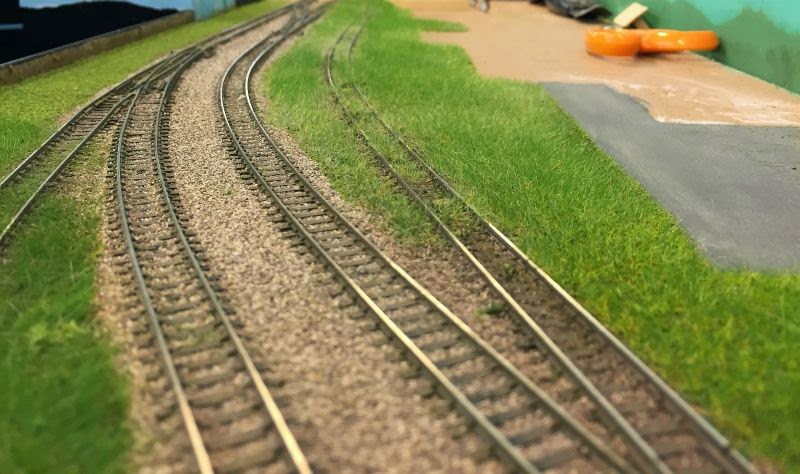 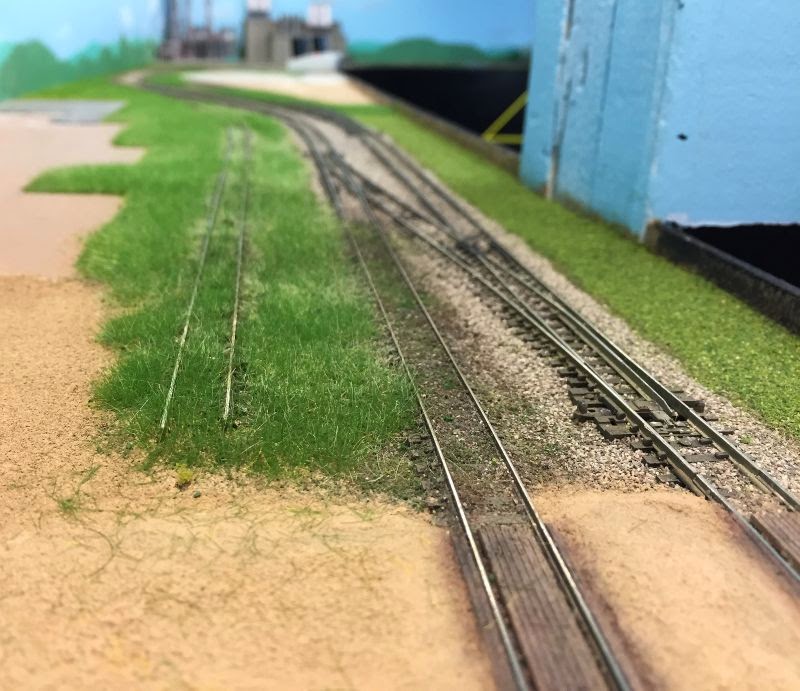 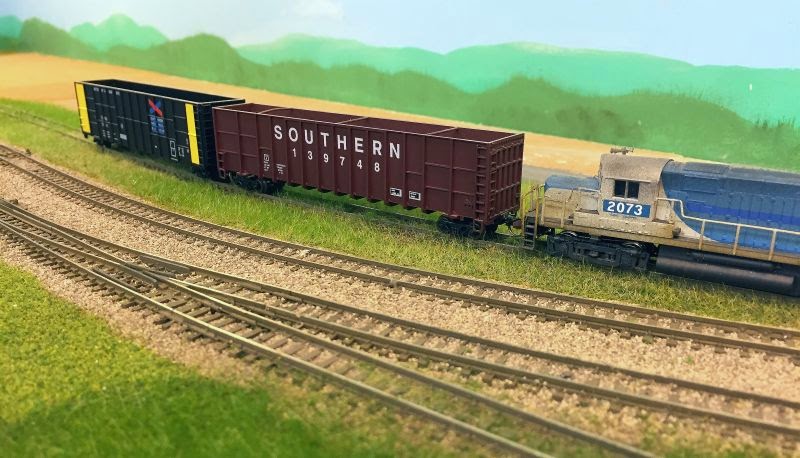 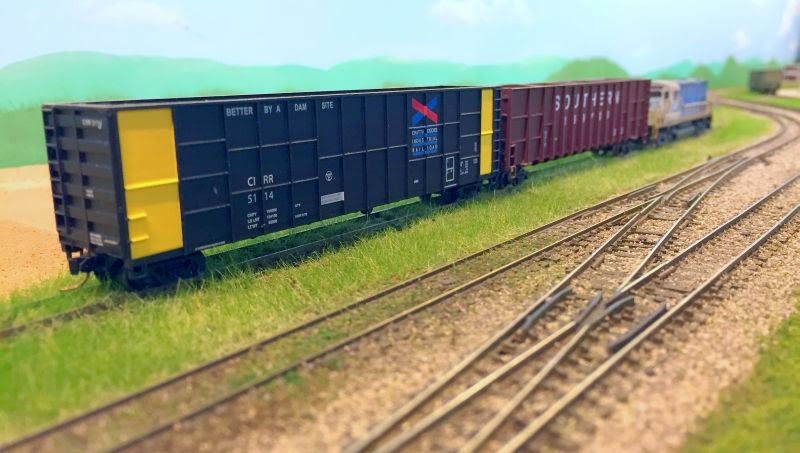 These last four are the Heavy Metal siding. 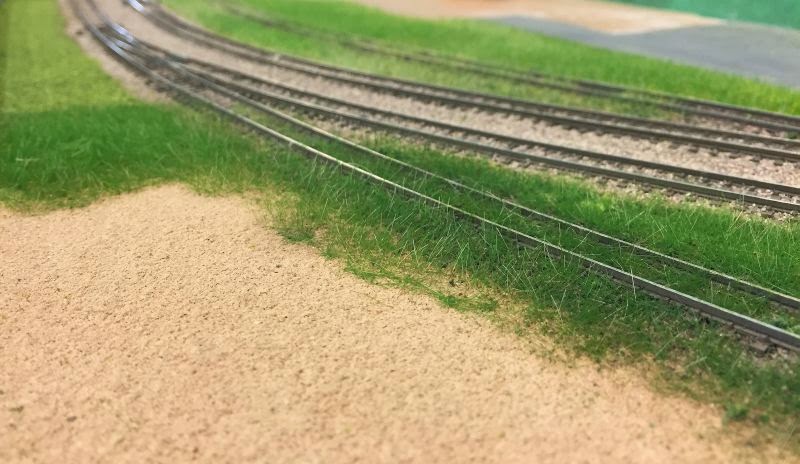 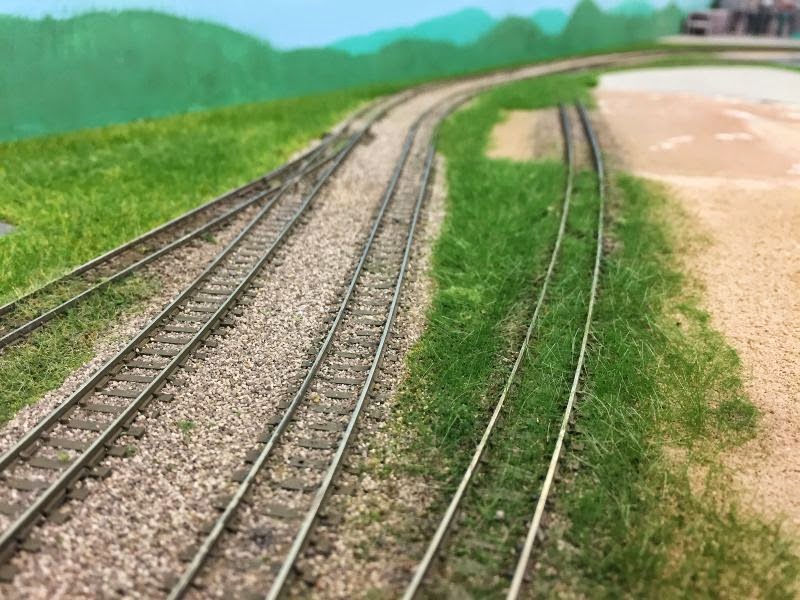 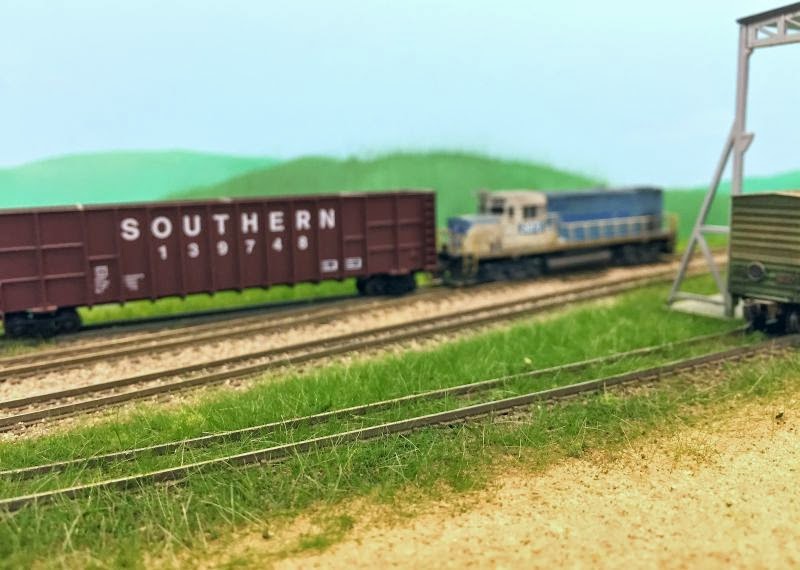 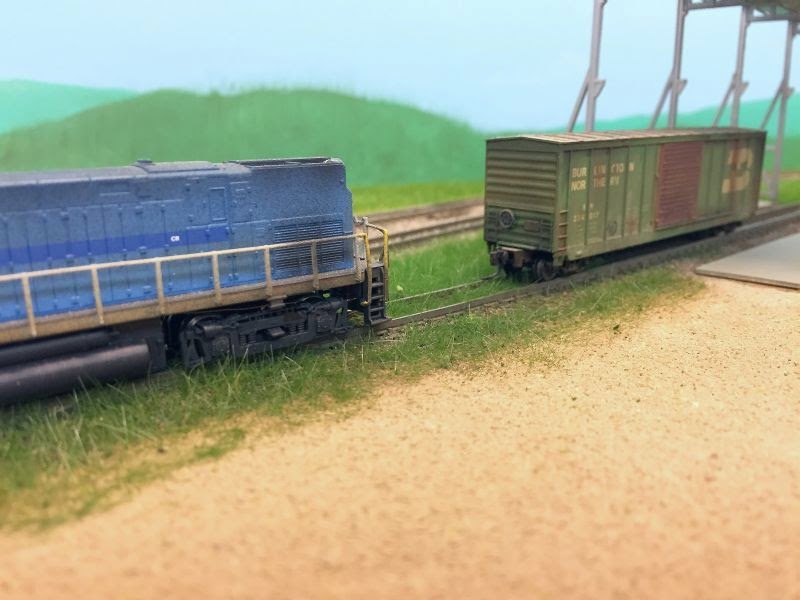 I've been warned about using static grass on active sidings due to the fact that it can come loose and get caught up in the gears of the locos.  While this is entirely possible, the urge to resist the desire to do this was too great.

I will go back and manicure the grass between the rails to a manageable amount so as to reduce any problems as much as possible.

Here's the proof, but please forgive the crappy quality of YouTube.  The original video was pretty sharp until it got uploaded.

Malvern will be the only place that will have sidings that are as overgrown as these.

Next comes the trees...