OK I'm back on track with the Olin-Chlor expansion project! I got the Tomytec towers  assembled and ready to install. 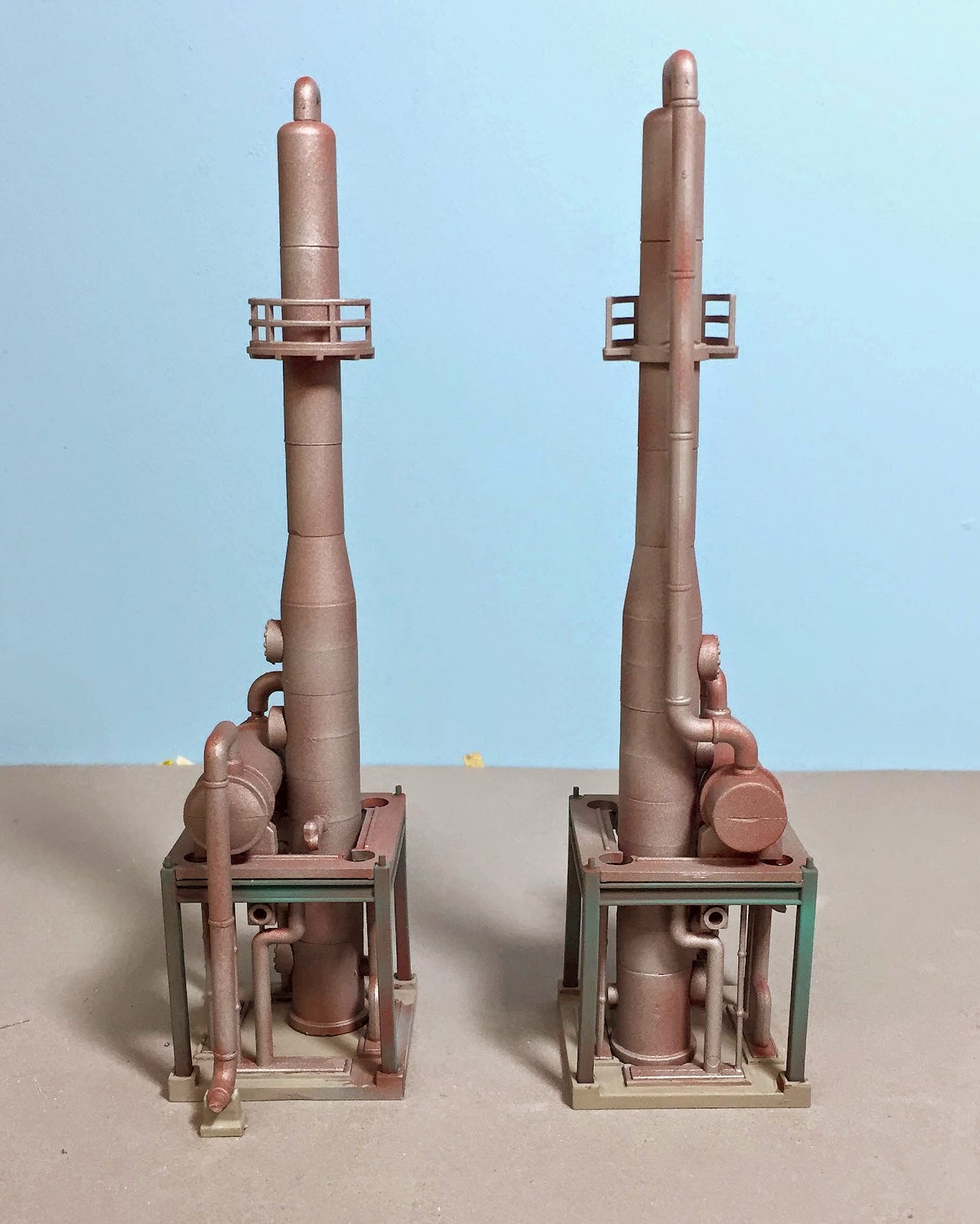 They are probably not the best or greatest detailed kit, but with a little bit of cutting, trimming and filing, you can get the joints to fit a lot better than if you did nothing to them. Before the final assembly, I painted everything that was going to be silver with an Oxide Red.  Then I went back over them with a misting of Old Silver that I tinted down with black.  I sprayed on just enough to cover the majority of the Oxide Red to make it look like the silver is wearing off.  This is probably all the weathering they'll get for now.

Now that I had these done, I was able to play "Musical Buildings" and see how things would fit in the given location so I could get the concrete pads located. While doing this several things came to mind and changes were again made on the fly.

I decided to concrete the entire area in Olin-Chlor and then build up separate pads for the pipping cage and for the two cooling towers since the distillation towers already had their own pad.

Next the building went under the saw again for the second time since I started working on it.  The first time I cut it down in depth.  I had actually given some thought to abandoning the building as I thought it was going to be too big for this location, but as I was moving things around, the thought occurred to me that maybe if I place a building flat behind it it wouldn't look like it was just plopped up against the backdrop, maybe give it some depth?  It just stuck out too far and everything looked to square and symmetrical.

I decided to cut it at an angle so that it was closer to the angle of the tracks.  This did two things for me: it took away some of the mass and it also gave me more room between the loading platform and the tracks which I could now fit a truck against the loading dock without using a shoe horn.   Since I cut the building at an angle, I did forego the idea of a building flat behind it as it would be hard to replicate a printed flat to match the angle.  It also made the area look a bit larger as it wasn't lining up with the walls or fascia.

Another idea I came up with was something to hide the 90° vertical corner. Several weeks ago Steven and I was talking about getting some of the tall smoke stacks that are available from Tomytec for use on his layout.  I figured that I could use one to hide the corner, but they weren't as tall as what I wanted.  I wanted something much taller. Last Saturday while Quin and I was at lunch we ran over to Mynards and went to the plumbing department to look for some PVC pipe and fittings. 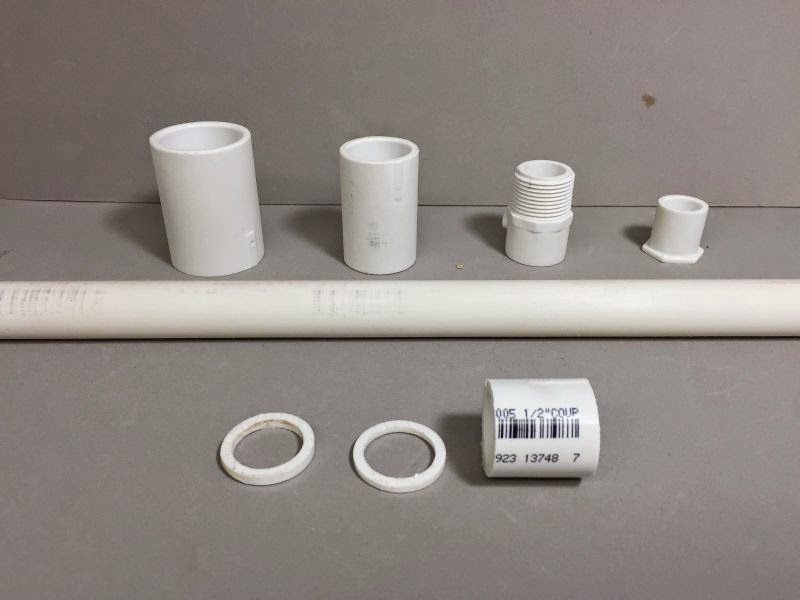 The two rings in the foreground we cut off one end of the coupling sitting next to it.  This was done to make a couple of rings around the stack, and came up with this.  Now it was much taller than I needed but it did the trick of hiding that corner! 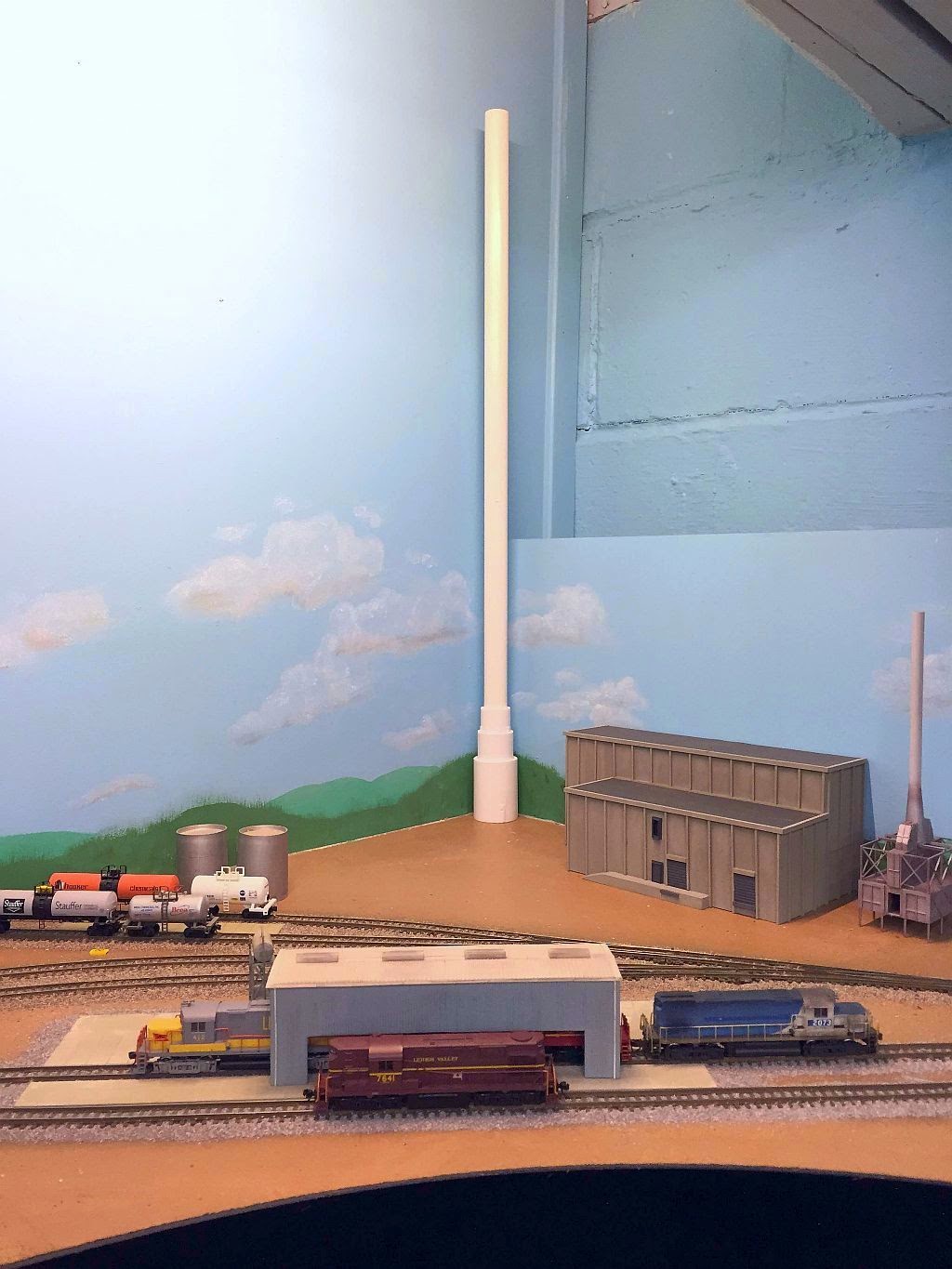 Now with that covered I needed to find a way to concrete the entire area.  I didn't want to pour plaster in that big of an area, so I ran to Home Dumpo and picked up another NO PARKING sign made of styrene.  This one was a bit thicker than what I used to cover the building with and it was much larger, 15" x 22".  After getting it cut and fit to the area, I taped and glued the joints, then using a score I made all the concrete expansion joints at 15' squares.  I slightly angled the squares from one area to the next so it looked like multiple pours had been made over time.

I stripped everything out the way and prepped the area. 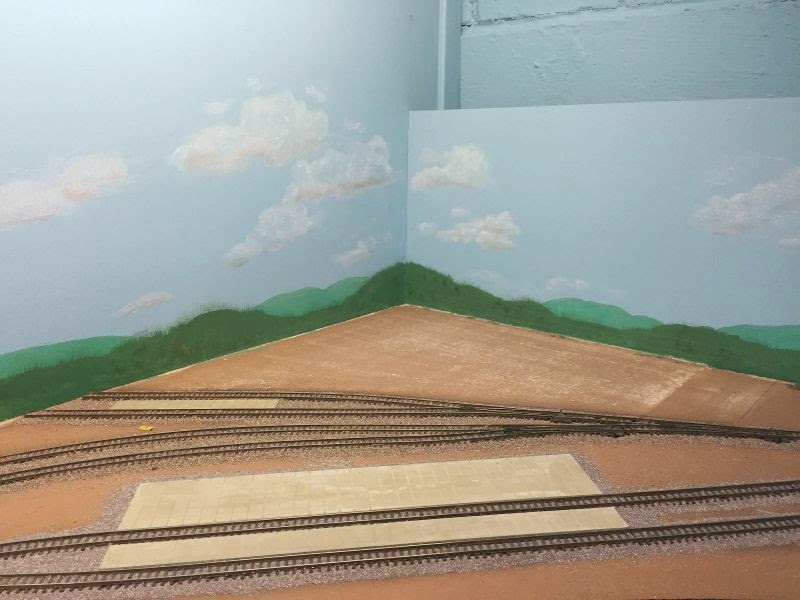 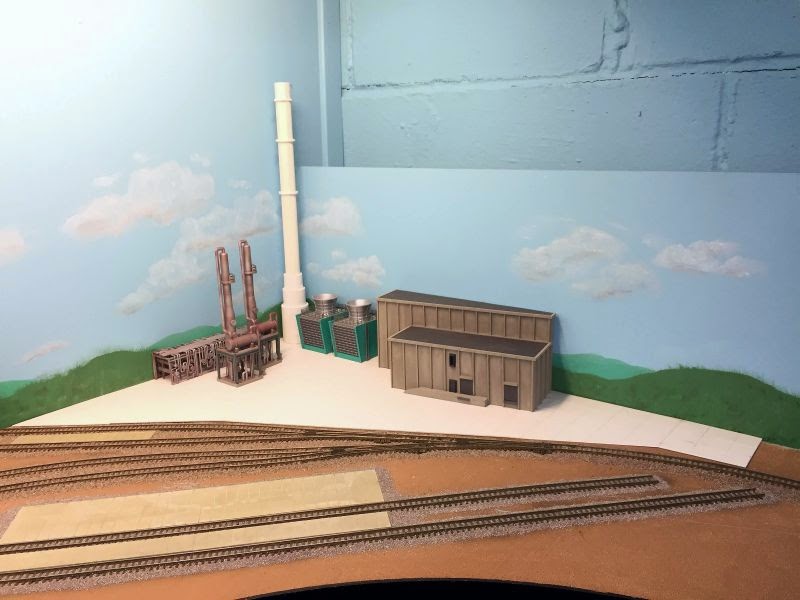 Once this was done I sprayed the concrete pad with a spray bomb of gray primer but it looked too clean and too perfect, I wanted it to look like it had a little age. Next I sealed it with Dull Cost and wiped on a wash of India Ink and then blotted it off the excess with a napkin.  Greg, Steven and Quin all thought it looked like a big Marble parking lot!  Plus it was a little darker than I wanted. 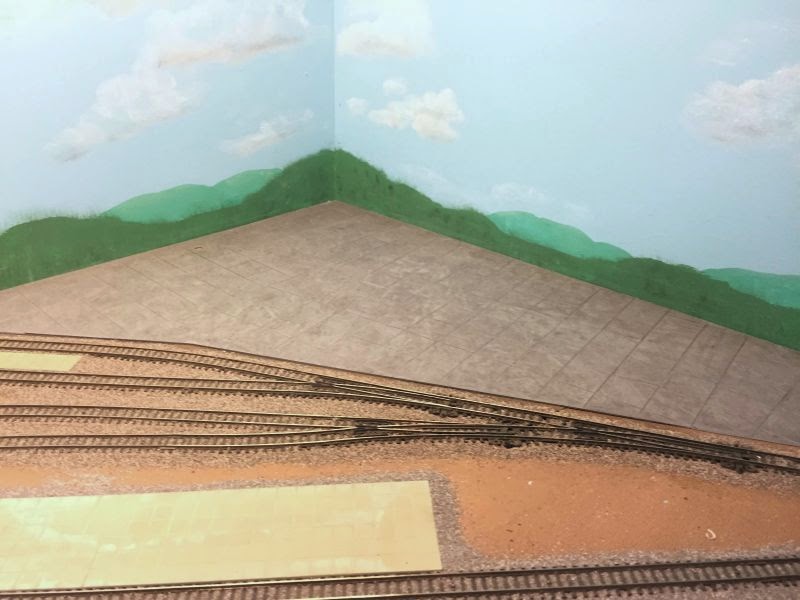 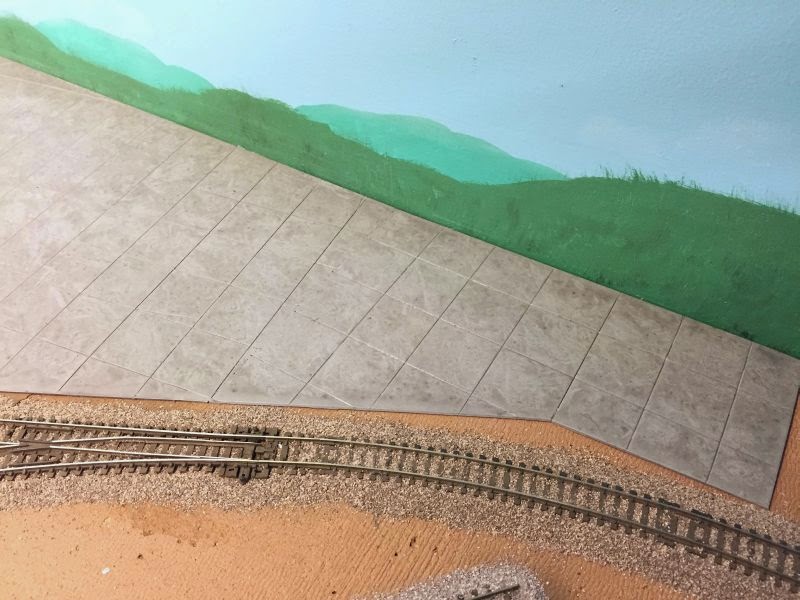 The small platform for the cooling towers was painted with Polly Scale Aged Concrete, the building was painted using Floquil's Concrete and the concrete is the gray primer with the India Ink wash.  Looks like Greg, Steven and Quin was right.  A Marble parking lot?

So here is what I ended up with: 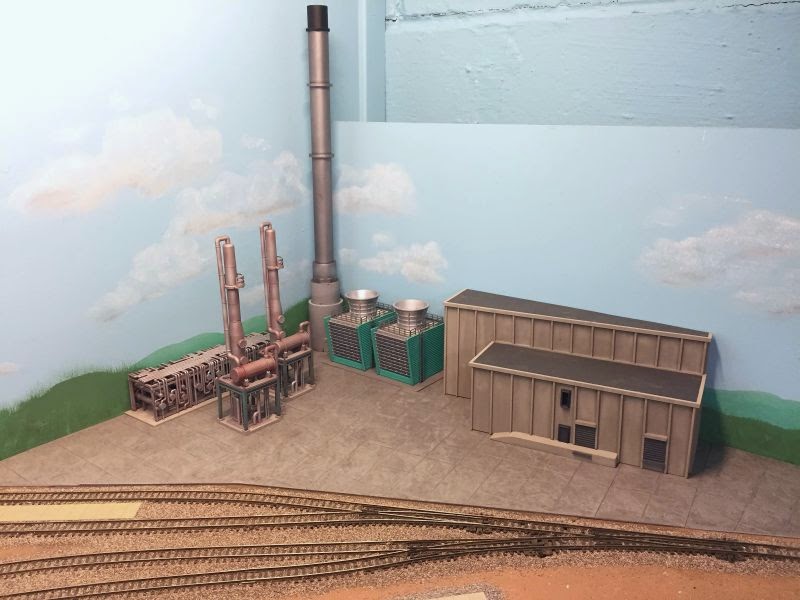 The next day I grabbed a bottle of Polly Scale "Aged Concrete" and ran over to Slobby Lobby with the hopes that I could pick up a some cheap acrylic craft paint and mix something closer to the Polly Scale.  I had given thought to breaking down and buying some the Woodland Scenics Concrete paint, but I just had the feeling that what they offered was nothing more than the same cheap paint at four times the price!
I did manage to come up with a decent match.  I don't recall what colors I used but I started with a gray and a beige that got me close.  Then I added a few drops of yellow and a couple drops of black. It came out very close to the Floquil Concrete, the same color as the building.

I'll try to get some shots of the paint colors in the next post as well as the concrete pad.   It's good to make some progress again.