After having two dry runs of the Tab On Car system behind us, we decided to have a full blown session with the tabs.  I've been itching to do this soon.

Several weeks ago I got an email from Coy Coles who lives in Olatha, KS.  He contacted me about my layout, the main yard specifically.  He's in the planning stages of his layout that will be following the White River route of the MoPac from KC to Little Rock.

His plans are pretty much complete but he's been pondering his main yard and how to tie it together. While searching the web for ideas he stumbled across my blog and found pics of my yard.  It seemed to fit the bill so he contacted me and asked if there was a chance to see it in person.

Long story short, he planned to go the Great Train Expo in Council Bluffs and I told him to stop by afterwards and we'd kill a few birds with one stone.

After chatting a bit and inspecting the yard, we decided it was time to start the session, Coy sounded enthusiastic.  He wanted something easy to start with so I gave him the throttle for Riceland  and told him to gather up the outbound cars and get them ready for the Haskell turn.  Having completed this, I gave him the W&OV job at Malvern,  After a quick explanation of what he needed to do here, I left him alone to go about the task.  Every now and then I stopped by to see how he was doing. 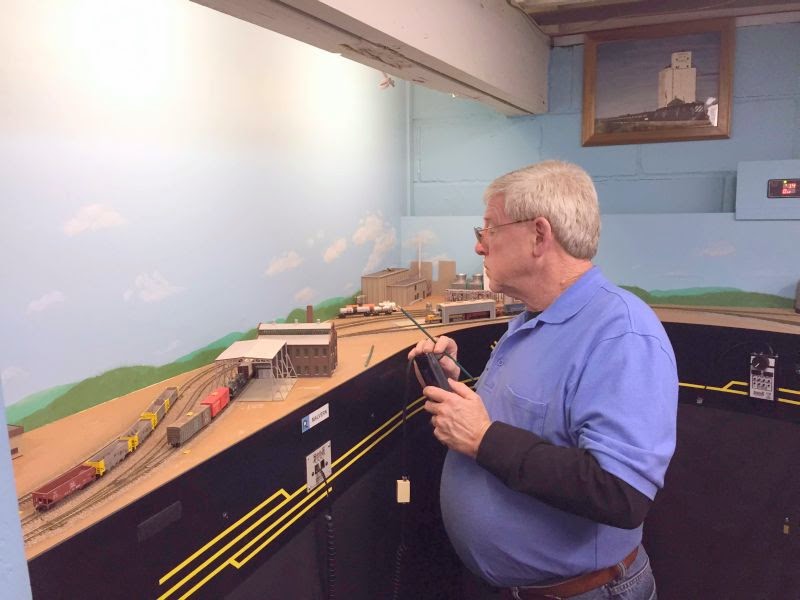 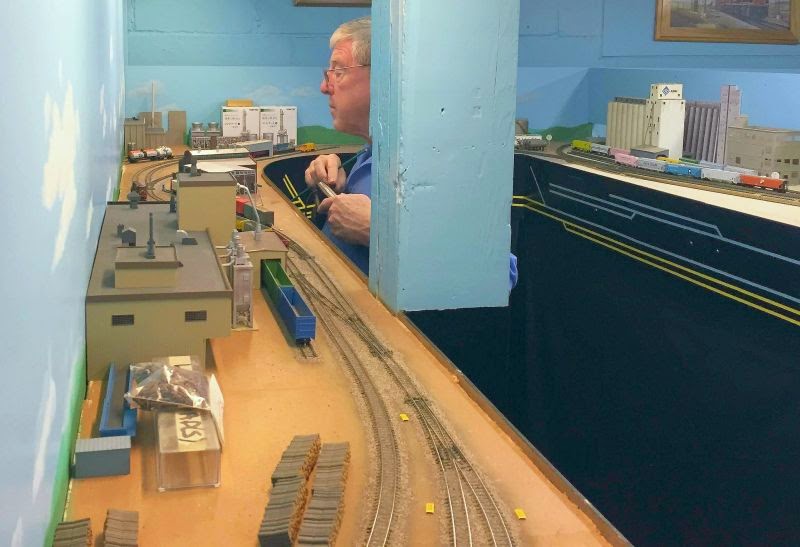 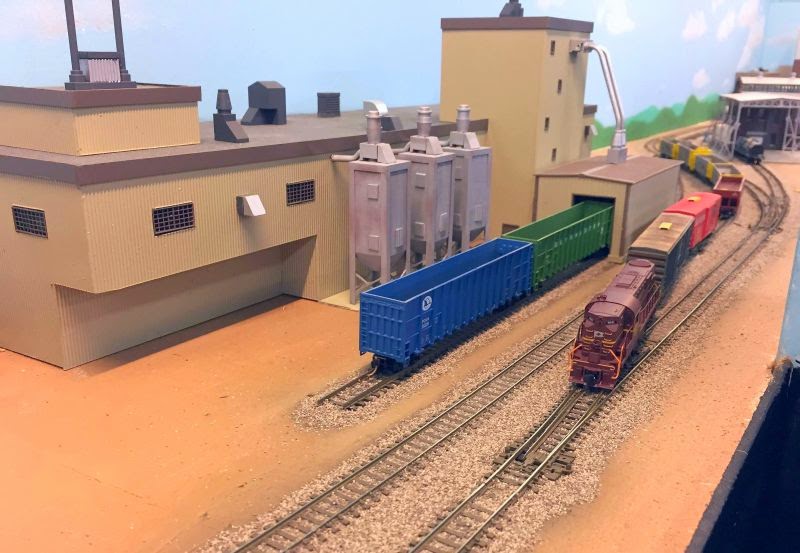 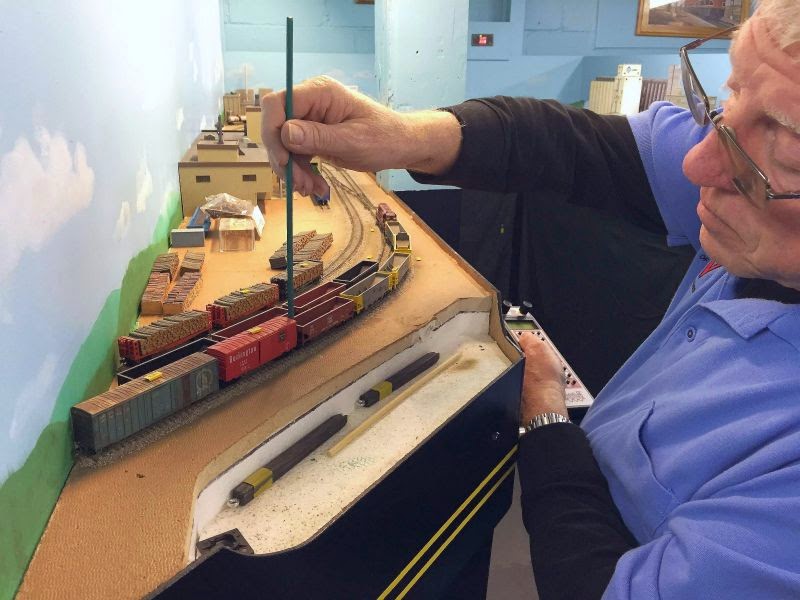 Meanwhile, Jon can be seen waiting for a Northbound Rock Island freight to return to Little Rock. The caboose is just passing through Fordyce. 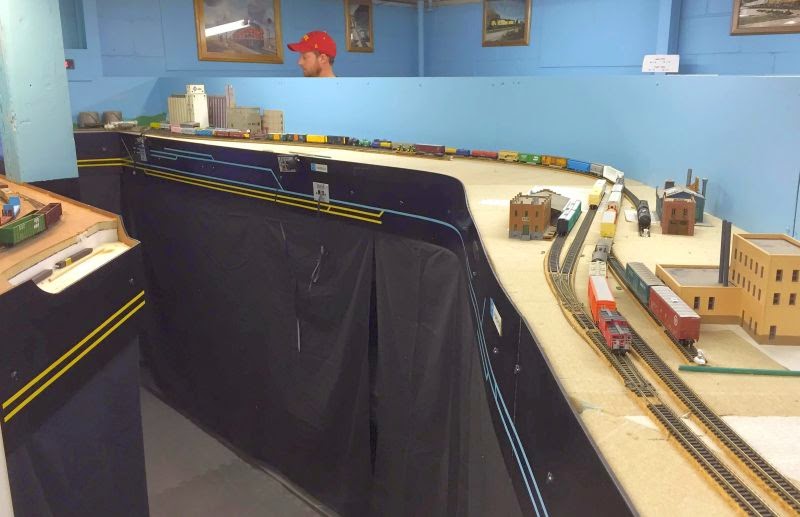 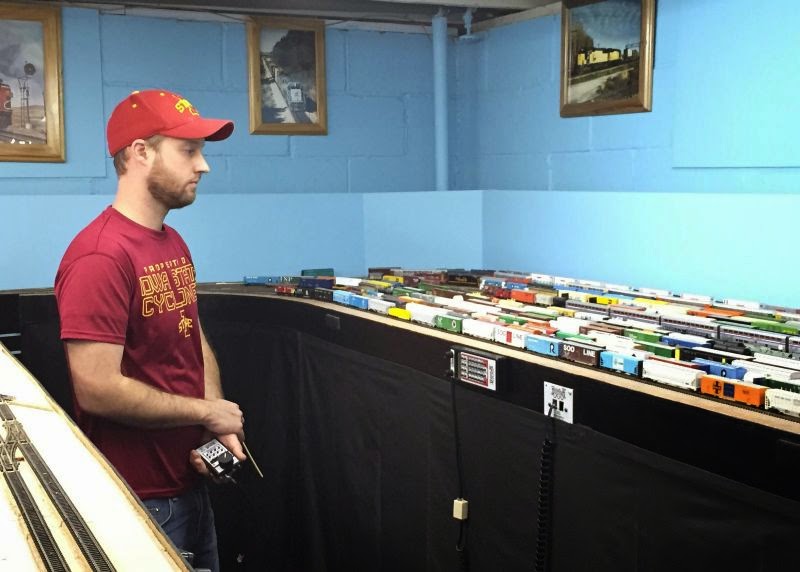 Somebody's Happy!
Hammering the diamonds at Ruston at speed. 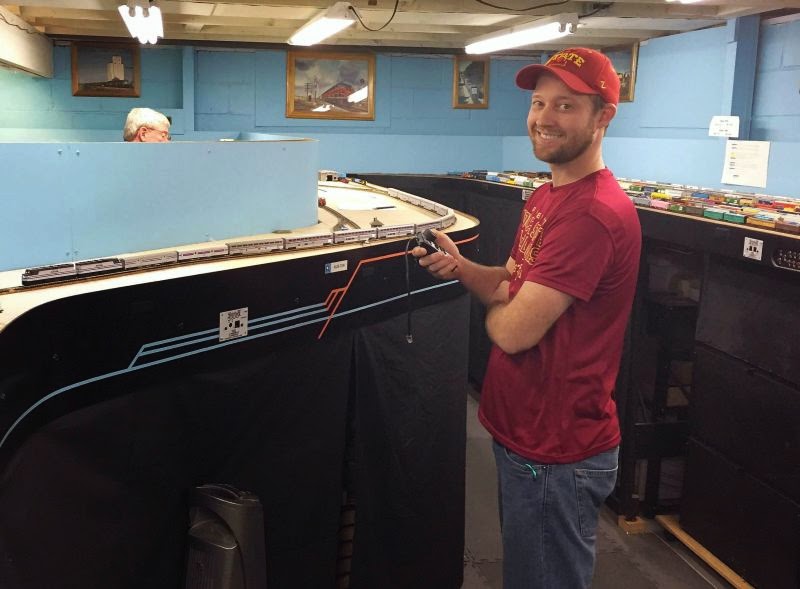 After completing the entire Malvern job, Coy was eager for the next job.
This time he's working the Haskell turn at Haskell, AR. having picked up the loaded hoppers from Riceland, he's about to back the empties into the place. 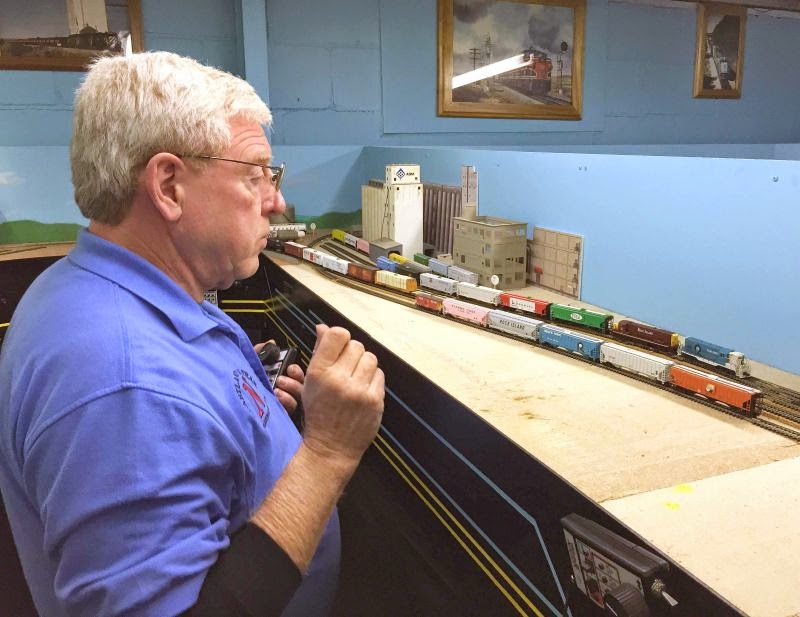 That jobs done!  Now to tie the train back together and head back south to Fordyce to work the Flappers plant. 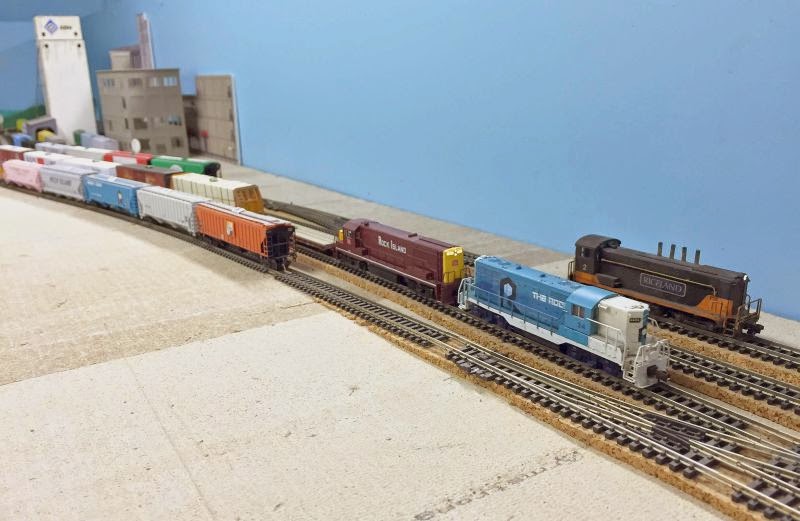 Awhile back Steven told me about one of the layouts that he has a chance to play on, they have sort of a tradition where if you screw up you get to wear a 3' Sombrero, known as the Sombrero of Shame.  You wear this until the next person earns the right to wear it.  I always thought this would be fun to do, so after some pondering, Quin and I came up with our own.  The Asshat!

It was introduced tonight and Quin was the first to wear it! 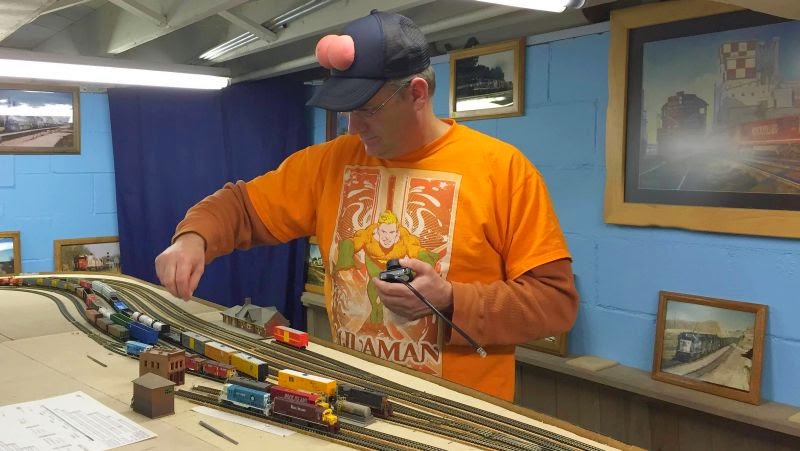 Then Jon got his turn. I'm not sure, but I think he rather enjoyed it?

All in all it was fine, fun afternoon!

I also tried something else out this time.  Ever since I installed the foam floor mats a few years ago, I was getting a lot of static electrical discharges during the winter months. Nebraska can get real dry in the winter time and very humid in the summer time.  I think this was the main reason that I've been having so much trouble with the decoders resetting to slower speeds randomly?  Everytime I touch the rails I'd get a good shock.

Friday night I picked up a small humidifier and also grabbed a can of Static Guard to spray on the foam mats.  The first thing Quin noticed was it didn't seem to be as dry as it has been in the past.  I told the guys to keep an eye out to see if they got any shocks tonights and none of them experienced any!   Maybe I finally got the gremlins under control?

While restaging the layout Wednesday night, I found about 20 locomotives that I needed to go back and  reprogram as they were all running at the reduced speed again, grrrrrrr! After two nights and about 6 hours of work, I got them running pretty much back to the normal settings again.  The only problem I found this afternoon was one U30C dropped out of consist.  I'm keeping my fingers crossed that this takes care of the problems?

I still think in time I'm going to replace the two PM42's I have with PSX units.