On the way home tonight I made my usual side trip through Biddle yard, this time I found #4446 shoving a few cars around, so I stopped and watch for a few minutes. After pulling back from grabbing some cars I was treated with to a view of an old dog that had obviously seen a rough life. What a sharp contrast between the car and the fairly clean GP! 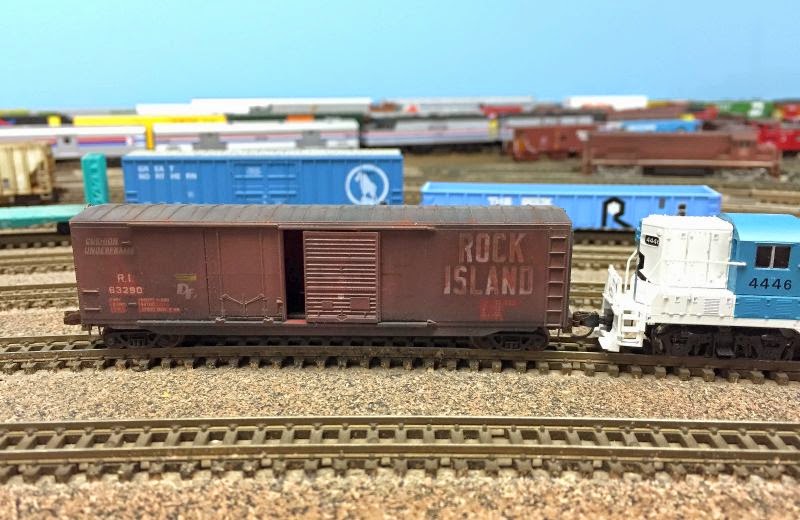 A few minutes later after the crew had finished up, I caught up with one of them and jokingly asked if it was headed for the scrapper?
He gave me a half smile and said   "Nope, it's bound for the W&OV in the morning.  I think the tag says Effin Recyclers in Camden?"

Well that kind of got my curiosity built up and I asked if I could see the lading. Sure enough, Camden, AR. "But what's this" I asked as I pointed at the routing? I handed him the papers and said "It looks like it was routed from Germany? That can't be".
He chuckled and said  "Yeah, it's the damndest thing, ain't no one can figure that one out.  Nearest thing we could tell was some joker was bored and had nothing better to do".

We chatted for a few more minutes and then he decided he'd better get back to the shops before he missed his break altogether, I told him thanks and and we exchanged a nod.

Hmmm, Germany?  I'm gonna have to pull out some maps when I get home and see if I can find a town named Germany or something close to it.


I wish to extend a word of thanks to my friend Mike Holly from the Elizabeth Oak Branch blog.
I've been in contact with Mike recently and have exchanged quite a few emails with him over the last several months or so.  Some of which were on weathering tips.

Mikes been doing a fine job on some of his Cleveland & Eastern RR locos, not too mention his layout, stop by and check them out.

Mike informed me that a package was heading my way shortly and to keep and eye out for it.  The other day it arrived and in it was this car!   Mike asked me if I could find a home for it on the Little Rock Line.  Mike, It'll fit right in, thank you very much!

Hmmm, Germany.  I guess the papers were right?