The last time I made a trip to Malvern was to see the new ALCo's.  More chatter last week on the squawk box sounded like a few more ALCo's might be en-route.   So I grabbed the camera and headed out.
Unfortunately, there wasn't a sole around the engine house to squeeze any more info out of.  The same power that I seen last time was still tucked away and looked ready for the next assignment.  But there was something new on the tracks behind them!  It looked like a couple more RS11's and another unit which was just peeking out of the house.
Don't know if these are for more power or if they will be donors for the original three?

With nothing happening at the house I decided to drive into town and grab some foamer snacks [that would be some Nuclear Burritos and Chocolate milk] from the local Kwiky Mart a few blocks away.

As I rounded the corner I noticed that Olin-Chlor looked rather torn up.  Upon closer inspection I could see they were breaking new ground for what looked like some kind of expansion!

The last time I actually worked on the layout was the first of November.  During the holidays I pretty much suspended all work on the layout and at Malvern.  I got kind of sidetracked with a weathering project for a friend and while I had the stuff out I decided to weather up a few cars and see if I could sell them on eBay before Christmas.

Having some good luck with the first round, I opted to get a few more done while everything was still on the bench.  During this process I remembered the announcement of the KATO Rock Island F2's! Damn!  Sure am glad I was able to sell some of those weathered cars, might have to do a few more to keep Mr. Wallet safe?

Upon hearing this my thoughts began to drift back to my earlier modeling days when I first fell in love with The Rock!  One of the first posters I got was a Howard Fogg poster that had a trio of Rock Island FA's splitting a pair of signals. 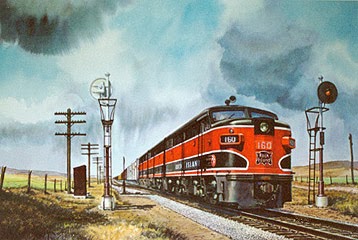 This got me thinking again about back dating the motive power from time to time or to just run a good mix of units.  The biggest obstacle that I would need to cross would be getting the LifeLike FA's chipped.  These are the newer LifeLike units with a split frame chassis, the FA1 & FB1.

After talking to several folks about getting this project underway.  Two guys, one of which was Brad Meyers of N scale DCC Decoder Installs suggested looking into using one of Aztec pre-milled frames.
Long story short, this was the road that I took.  I stripped one of my units down as per instructions and sent it to Aztec who promptly returned a milled frame within a few days.  A couple of days later a Digitrax DZ125 arrived and was promptly installed.  Success!   Now with that done I only need to see if I can get them to run halfway close to the same speeds as the rest of my fleet, otherwise I will have to segregate them and they'll have to run by themselves.

So, with all that out of the way and my itch having been scratched, it was time to return to Malvern.  Then next biggest job was going to get the buildings designed and built for Olin-Chlor Alkali Products. Knowing that any type of complex that deals with liquids would require a fair amount piping in order to look halfway respectable I knew I was going to come up against another challenge; All that Piping!

After finding an Olin-Chlor plant located near Charleston, TN on Bing maps, I noticed that they had a fairly simple square building right next to some loading platforms.  Perfect! 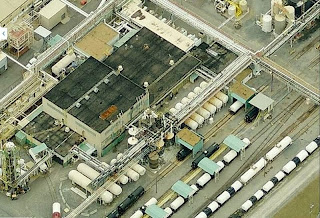 With the method that I used for the Crushmoore building still fresh in my head, it looked like I should be able to use the same process for this building.  Now after having some idea of what I could use for the main building and some old Walthers petroleum storage tanks from the old modules, I started playing musical buildings to see if I could come up with something that would fit the space and my needs.

After lunch today I turned the saws on and grabbed my pin nailer and bottle of glue. 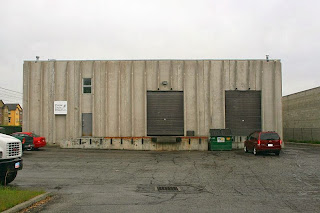 I hear the sounds of construction again...