A closer look at Malvern

Since I'm starting to get the scenery going in Malvern I thought I would give you a detailed look and history of  Malvern.  It might make it easier to follow along rather than just reading about the town and industries.

From the time I started thinking about building a layout I have always had it in mind that a layout would not be complete without some sort of branch line.  Be it a short piece of track to drop cars off  for an "Off-line" destination or a full blown town with industries to serve.  The area of the room that Malvern resides in lent itself very well for a branch line.

While designing the layout, I knew I wanted to include the little short line called the W&OV [Warren and Ouachita Valley RR].  The road actually existed and connected to The Rock Island at  Banks, AR. 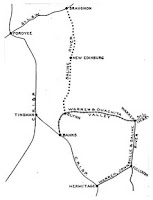 They were basically a lumber hauler that was owned by the stockholders of the Arkansas Lumber Company and the Southern Lumber Company, both of which have mills on the line.  One of their locomotives was a 10 wheeler.

In 1948, the Rock Island purchased the Warren and Ouachita Valley Railway and assigned a Rock Island Whitcomb  75DE12c #1013.

Proving not to have enough power,  the little Whitcomb was replaced with a Rock Island EMD SW-1 #539 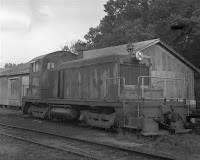 Disclaimer:
I borrowed all of the above photos from the internet and the information came from various sites as well.
The information may not be 100% correct, but it's close enough for my purposes

Since the original W&OV was purchased by The Rock 1948 that meant I had to re-write some more history.  So, in my history book in 1979 when The Rock started to shed their branch lines for capital, they sold some of these lines to a newly formed short line who re-used the original name; The W&OV.

One thing that I enjoy about modeling is not only building a layout, but also trying to build a history as well.  To me this seems to make the layout a little more plausible.  So this is what I came up with;

In the early months of 1979 as bankruptcy was drawing near, The Rock started hauling the seafood North from the Gulf and actually made a small profit from doing this, but they needed more capitol.  They decided to start shaving off the mainline, down to the bare minimum and sold off two portions of the line to the newly formed W&OV.

The first section to be sold off was the original line that the original W&OV had operated: Banks to Warren and the remaining section that connected to Tinnsman Jct.  The second section was the branch that started at Haskell, AR and ran West to Hot Springs, AR and South to Sparkman, AR.
After the purchase of these two separate sections, the newly formed W&OV moved their headquarters to the northern section and setup shop at Malvern, AR. They also received trackage rights to run between these two lines and interchange with The Rock at El Dorado, AR with a train they nicknamed The Razorback.

With the history all re-written, it was time to start getting a track plan that would fit in the area I had to work with but nothing overly complicated.  I wanted several industries that could be found in the South as well as any small town USA.  I also based these industries on some of the rolling stock that I had and wanted to use; tank cars, wood chip hoppers, pulpwood flats, coiled steel cars, bulkhead flats, gondolas and open hoppers.

The first was a chemical plant which are common in the South.  This would become Olin Corp, a company that would produce Hydrochloric acid that would ship and receive tank cars.

The next would be a forest product based industry, I chose a pulpwood plant that received loaded pulpwood flats and shipped out loaded woodchips; Crushmoore Ind.

I also wanted a quarry [modeled as siding] that used hoppers to supply an online cement company in Dubach, LA with aggregate. These hoppers would be captive service cars that would never return to the main yard.

The last three were industries that could be found in any small town USA;
An LPG dealership; Frump Gas & Supplies.  They would receive loaded LPG tanks.
An implement dealership; McClehaney Equip. Co. Loaded flat cars and boxcars with implements and supplies.
The last one is a paper recycling company [further down the line, also modeled as a siding as well].  Empty boxcars would be delivered and loaded with bails of paper and cardboard.

Now, knowing what industries I wanted and what types of cars to use, it was time to get the track plan worked out.   As I said earlier I wanted something simple so I based it off  a single track main with at least one siding, something most small towns would have.  This would allow me the ability to make "run around" moves so as to access all the spurs which would be facing both in directions.

The W&OV track is in purple. 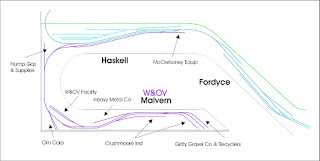 Once I got the track in place I could now figure the max amount cars for each siding/industry.   To make sure I had enough room to work, I made the siding in Malvern as long as I could get it,  better too much than not enough.

Operations of  The Rock

The Little Rock Line has two daily locals that originate out of El Dorado yard. The Haskell turn [North bound] and the Winnfield turn [South bound].  Each turn originates at and returns to El Dorado.  Having decided to run the locals as "out and back" runs from El Dorado, I needed at least one siding at Haskell and one siding at Winnfield to accomplish this.

In my original design I had planned for a full Wye and one siding at Haskell, this would allow me to turn the locos and run around the train via the Wye.  After running a few trains in my head I decided to forgo the full Wye and make one leg a stub ended siding and model it as removed, which I thought would add a little more visual interest to the scene.  I designed Haskell with one siding that connected to the remaining leg of the Wye leading to Malvern.  This would still leave me with a "run around" ability, but would require the Rock Island locomotives to travel on some of the W&OV trackage.  So an agreement was struck for this movement.

In the process of laying the track I had a thought that it might be nice to have a second shorter siding at Haskell for extra room if needed.  This turned out to be a good idea as the W&OV also needed to serve McClehaney Equipment and could slip by anything setting in the main siding.  This also proved to served as an optional Arrival or Departure track for the W&OV if needed.

Originally I had planned to have the Haskell turn deliver cars to the W&OV, but it was nixed after we ran the first test session.  The Haskell turn had way too many cars and it took forever to switch out the cars for Riceland, McClehaney's and the cars for the W&OV.

Now, after the Haskell turn works the line north to Haskell, it pulls into the siding, runs around it's train and works the Riceland plant, then heads back to El Dorado working any trailing point industries on the return trip.  The amount of work and time was reduced to a much more manageable task within the set hours of the ops session by not having to deliver cars to the W&OV.

This is where the fun begins.  Since The Rock no longer delivered to the The W&OV, they would become responsible to get the cars themselves.  This would required the W&OV to travel over Rock Island rails to El Dorado to deliver and exchange cars.  Not only did this give the W&OV crew another job to work, it also added to the traffic on the north end of the line.

A two man crew can be assigned to the W&OV during any operating session.  After receiving their Wheel Report and seeing what cars are bound for Malvern, their first task is to use the local switcher to gather the appropriate cars from the industries in Malvern to make room for the inbound cars.  Once these cars have been gathered up and the road power is tied onto the Razorback [The W&OV's daily train to El Dorado], they ask for permission to make the run to El Dorado.
Upon returning to Malvern, the power and caboose is cut off the Razorback, and is taken to the house.  The crew then grabs the local switcher and begins the task of delivering the newly arrived cars to their respective industries that is spelled out on the Wheel Report.
Once this is done, their job is finished for the session.

Having to retrieve their own cars also required a purchase of some road power and a caboose to go along with the Malvern switcher.

I had first planned to use a couple of ex-CR SD9's [one of which can be seen in the previous post] but after some careful consideration, the management, that being ME, began to look at some second hand ALCo power.  Eventually the 2 SD's will be traded for 3 four axle ALCo units;  2- C420's  and 1- RS11.  One of the newly announced Atlas S-2's will be the local switcher when they arrive.

Nothing better than solid ALCo power!

I hope this give some of you a better understanding and insight of Malvern and how it plays a roll on The Little Rock Line?

Email ThisBlogThis!Share to TwitterShare to FacebookShare to Pinterest
Labels: Design