I sat down tonight to start removing the dead weeds and to my surprise, they popped right off.  I rolled the parchment paper back and used a tweezers to grab an edge and off they came.  I'm not sure if using Elmer's glue over Mod Podge was the trick, but whatever it was it worked.

After staring at them for about 30 minutes while I peeled them, I actually kind of like the darker color.  This color is Mud, the lighter is Dirt.  But I think both will work just fine, once they get installed they should blend right in.

The yellow grass worked and looked much better than the light green did which is what I suspected.  As I said before, these are made from a mix (2:1 ratio) of 4mm & 7mm grass.  I did this because I thought a dead weed might stand out a little better next to the 2mm & 4mm green that I used elsewhere, we'll see what it looks like after I get a few installed.

As I was placing them in the tote, it looked like I had a bunch of Sandburs! 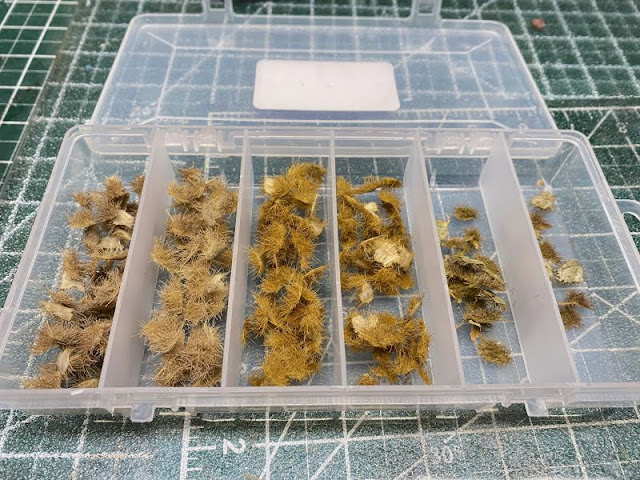 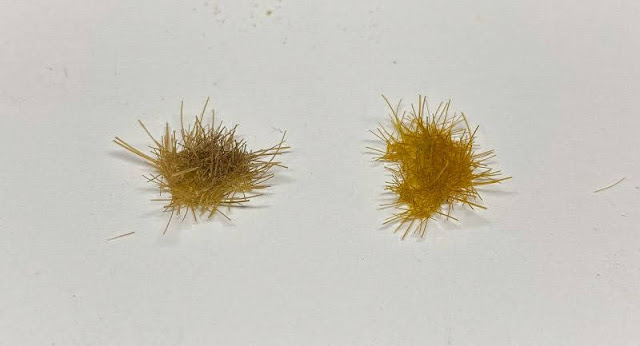 The only issue I saw was some of them had flakes of paint that stuck to them, but they come off with a quick flick of a fingernail.

Overall I think these will work just fine.