I'm slowly getting the basement and layout back in order.

After getting the stuff cleared of the section that is El Dorado, I took a break and got thinking about how this area will be used now with the reduction of the Operations.  In the past this small yard was a bustling place that seen four trains stop here dropping off and picking up cars for the two locals that that were based out of here.

The unlucky crew that got assigned the El Dorado job was kept very busy throughout the session shuffling cars in and out of the yard for the locals as well as attending to the three industries that are located here.

With the new Ops the entire layout will now only see four trains total pass through El Dorado.  The two through freights and the one local that runs both ways.  The local will drop off cars on the A/D tracks that will be bound for the opposite direction and it will pick them up on the return trip.  The local will still drop off cars for the three industries in El Dorado.

Since the traffic has been reduced, I think I'll reduce the amount of yard tracks as well.  At one point I had planned to have El Dorado proper be raised about 3" between the yard and backdrop and two of the three industries would have been on the raised section.  This meant that there would have been a steep incline with a tight radius loop to reach the industries.  There's always been a burr in my side about this setup, which is one reason why it never got done.

What I plan to do now is to keep everything on the same level as the yard and remove several things so I can get the industries set in place.

I snapped a shot of the existing town and then ran it through my editing software to virtually remove the tracks I have in mind. 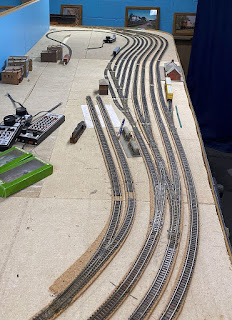 In the foreground there used to be two tracks for the local engine facility where the power for the two locals were kept.  I removed one and shortened it up for the spur to serve the second industry.  I'll more than likely move it a little closer the other tracks as well. 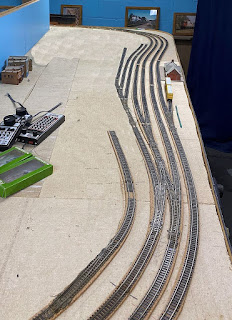 This should now leave me with enough room for the two industries as well as road that will run from end to end and connect the two industries.  It should also give me the option to make a town scene with a little more space that won't feel cramped.

So now I have three things to strive for in the future:  I have two locos sitting on the workbench ready for paint that I left them before the remodel began, to completely rebuild the staging yard and now the redesign of El Dorado.  The juices are starting to flow again...