In my last post back on December 30th, I explained why I had stepped away from my layout due to a bathroom remodel and wished everyone a happy and prosperous new year.  I guess that didn't happen did it?  2020, what a year so far and we're only half way through it.

After some friendly prodding from some of my modeling friends, I finally made the decision to go back down and try to get started cleaning up the basement and layout.

Back in September I made a trip to Denver to meet some old friends and Op on one of their huge basement layout.  After getting back the remodel got under way and that, unfortunately lasted much longer than I hoped it would have.

We decided it time to update the bathroom, which primarily involved removing the old tub and replacing it with a walk-in shower.  But before we could start, some plumbing issues arose that needed to be fixed first.

The following months seen pretty good progress until it was time to install the plumbing.  The shower head and controls came in and were the wrong models and color, then the toilet (the most important thing) came in the same way, wrong model and color.

The next delay were the cabinets, the builder was running a bit behind so that meant our cabinets were also going to be a bit behind.

By December 18th all the plumbing was installed and working, so life somewhat returned to normal.  By March I had everything wrapped up.

And then the world went crazy...

With all the stuff going on in the world, unlike most other modelers who made the best of the lock down, it just didn't do much for my moral and just left me feeling like "Why bother".  Last fall after the remodel started up I couldn't do much to the layout and it was about that time that I kind of got back into my railfanning and when it took off, it took off.  I spent the from November till now trackside with a new camera and more recently, a drone.  Here's a link to my Flickr page should anyone be interested.
https://www.flickr.com/photos/185752032@N04/with/50077083938/

The lull in the basement continued until today.  Maybe it was the hot weather, maybe it was the peer pressure or maybe, just maybe it was the sheer boredom of the moment?  I gathered up some supplies to get after the basement.  But before I get started, I thought I'd snap a few pics of the bathroom and the resulting aftermath of the remodel and what I'm up against. 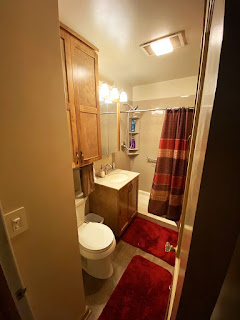 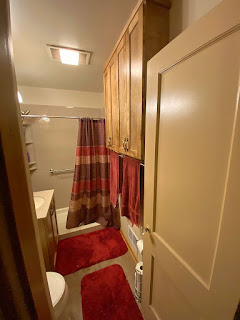 In the first pic below you can see the new waste line that needed to be installed before the remodel could begin.  The rest are of from around the layout and you can see how how it became the new storage shelves.  The shelves behind the furnace are full of old model railroad magazines that I've collected over the last 30 years or so, they are the first thing that will be attacked and thrown out! 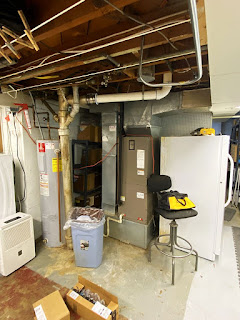 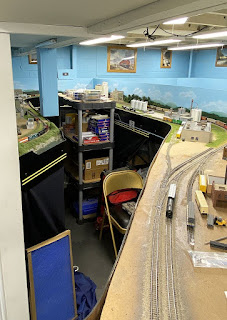 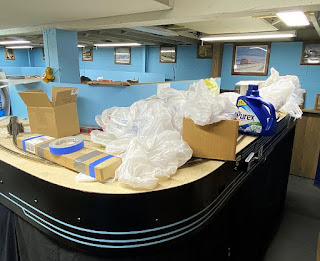 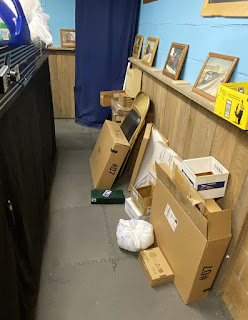 In this last picture, under the yard throat is the water main.  When the water was shut off the plumber told me it was high time to replace the old shutoff valves (probably original valves from 1952) since he didn't have a good feeling about them and wasn't able to get them to completely stop the water flow.
So now I need to get back in there and clean that mess up along with some minor mold.  Then I can replace the metal shelving and toss more unneeded junk that's been collecting under there. 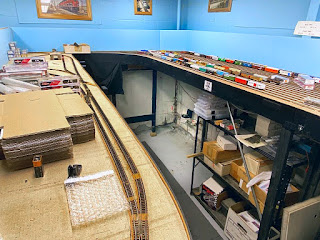 I'm hoping by this fall that things will be back to somewhat normal and I can resume running trains and continue on the scenery.  Providing the Aliens don't show up or world doesn't end next week?