At least that's what I'm calling it for now.

The history of this plant is as follows.
The road that served the plant was a branch line or short line which shut down or abandoned the line leaving the plant without rail service.  Rock Island was asked to build a shoofly so rail service could continue.

This weekend I found enough time to start ripping things up so I could start the work on the fertilizer plant.  Wasn't sure how much room I had to work with nor do I know how big the plant will be when finished.

I managed to get the cork and track relaid on the sections that I could.  This being the second Haskell siding and the Shoofly  leading into the new plant. 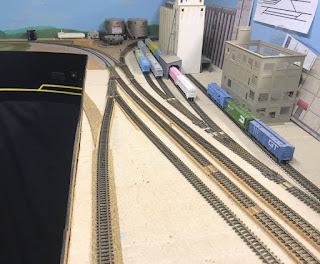 After that I got the cork tacked into position to get a feel of the room I had to play with, then tacked down a few sections of track. 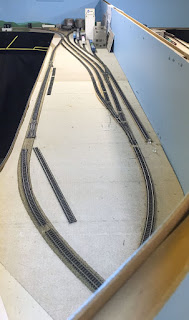 You can see that I also reworked the south end of Haskell siding by removing the two #6 turnouts and replaced them with one #8.  I also decided to remove the short spur that was for Ghuntz Implements. 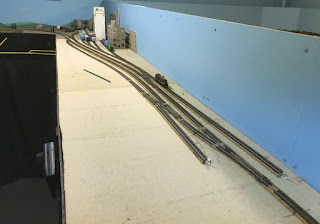 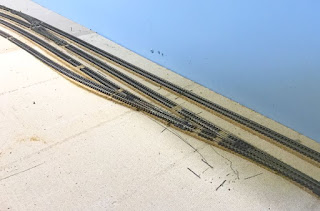 Next I need to determine the footprint of the plant as well as the size of the buildings.  Since I have nothing special in mind for the main plant building (where the hoppers will unload) I can't install that spur yet, but I do have what is needed for the tank loading spur.  I picked these up awhile back when I decided to include the fertilizer plant on the layout. 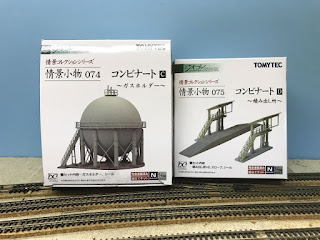 I have four of the spherical tanks and two of the loading platforms.  I was surprised tonight when I  opened the platform box and found there are actually two platforms in this box.  Since I can't read Japanese I wasn't sure if there was one platform with two options or two with one of each.  What you see on the box IS what you get: two platforms and one truck loading ramp.  Now I have four...

So the next thing on my list will be to get some of the kits roughed in so I can get a feel of the size and how many I can fit in the area.