...for the operators, not for more layout though.

The curtains that you see in the background are covering up several metal 5 shelf units that I installed years ago to clear out the basement so I could start on the layout.  Then I hung the shower curtains so things wouldn't look so cluttered. 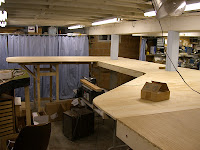 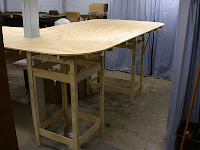 After the first ops session I was told "Those shelves have got to go"!  Which I planned to do eventually.

If the El Dorado yard operator was working the yard, he would have to move out of the way to let another crew get past.
At El Dorado,  between the fascia and the shelves there was only about 27" inches of space, and around the corner there was even less, about 20"

Now with the shelves removed, I have about 43" at El Dorado and about 36" around the corner. 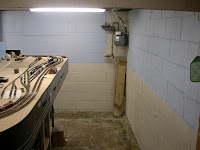 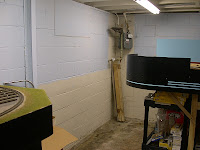 When I tore the shelves down, I re-built them into three shelf units and then slid them under the layout back to back like I had planned to do all along.  These will then be covered once I get the rest of the skirting installed.  In the last picture above you just can see one of the new plastic three shelf units that fit nicely under the south end of El Dorado.

Here are some of the shelves under Haskell.

Now you see them 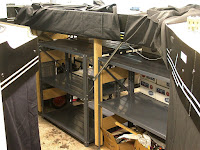 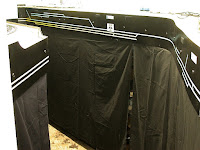 I plan to hang another curtain at a angle so as to cover up the gas meter and then plan to repaint the walls and clean the floor so I can get it repainted as well.  Slowly but surly it's coming together and another step closer to scenery!
Aaaaahh!